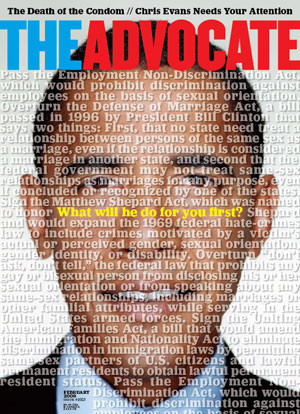 via:iChatGay Blog "What will Obama do for Gays?"

When a Nod’s Not Enough [Advocate]

Barack Obama was arguably the most pro-gay major-party presidential campaigner in American history. From his first national political address (the barnstorming keynote he delivered at the 2004 Democratic National Convention) up to his acceptance speech in Chicago’s Grant Park, he repeatedly spoke of the struggles gay people face, explicitly linking them to the greater civil rights movements that have illuminated American history. So it’s understandable that his election has left gay men and women feeling a bit giddy. And the fact that all this inclusive language is coming from a man who, as of January 20, will become the country’s first black president makes the rhetoric all the more meaningful.

What will he do for you first?